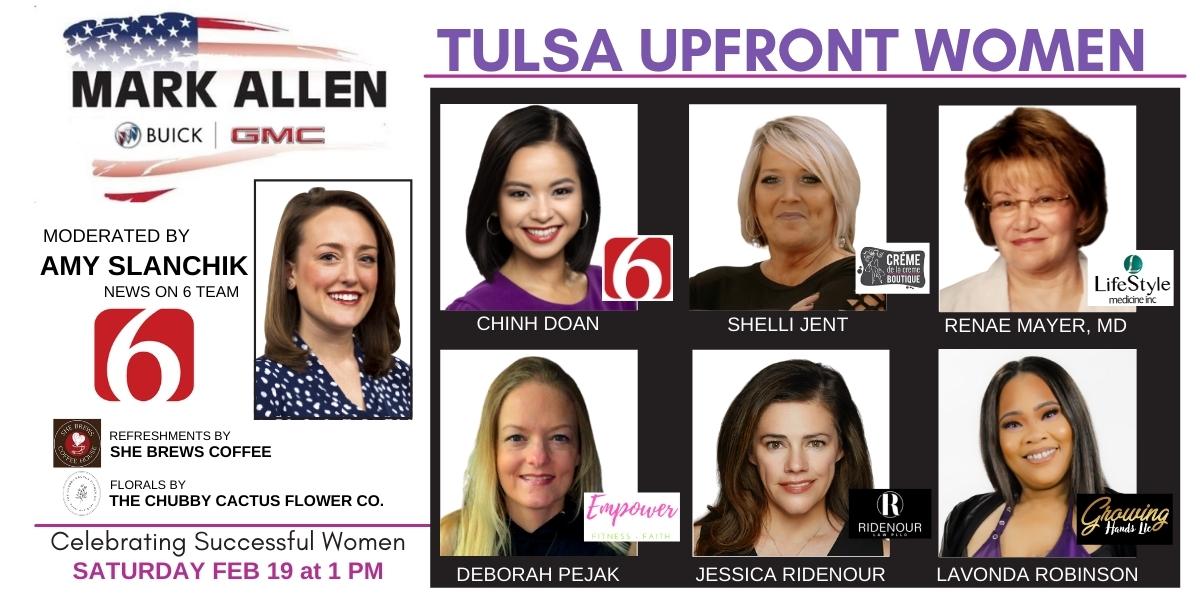 Meet 6 Smart Saavy Women With An Eye On The Future

Saturday Feb 19th at 1pm on the Entertainment Stage

Get inspired to channel your inner warrior princess at TULSA UPFRONT WOMEN. Our panel of successful women will share their journey and remind you that you are strong, confident, and courageous!
You will be inspired to take a leap of faith and embrace your dreams and big ideas.

Enter the Audience drawing to WIN the Raffle 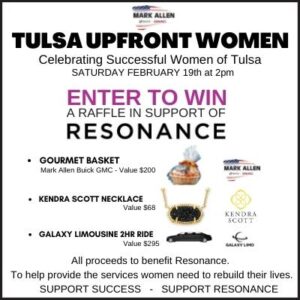 All proceeds to benefit Resonance, To help provide the services women need to rebuild their lives.
SUPPORT SUCCESS - SUPPORT RESONANCE

Moderated by Amy Slanchik - News Reporter at News On 6
Amy joined the News on 6 team in 2016 after spending 2 years in Fort Smith Arkansas. She is thrilled to be back in the Sooner State and is passionate about story telling. Originally from Wisconsin, Amy worked across the country in several different newsrooms while earning her bachelor’s degree in journalism. She considers herself an “adopted Okie”.

CHINH DOAN - NEWS On 6 Weekend Anchor & Weekday Reporter
Chinh a former refugee, foster child and the first in her family to graduate college
hopes her personal story will inspire others to follow her motto of “work hard and be kind”. Chinh born in Vietnam came to Oklahoma City with her father at the age of 4 not knowing any English. She became a naturalized citizen in 2008 and sponsored her mother to come to America in 2012. Before coming to News on 6 Chinh worked at KETV News Watch 7 in Omaha, KWTS in Central Texas and had two fellowships at NBC’s Today and CBS News. Chinh enjoys being involved in the community.

SHELLI JENT – Owner of Crème de la Crème Boutique
Shelli was an abused child suffering trauma on many fronts and turned to food to protect her. After raising children and being involved in only her family at the age of 40 Shelli attended Beauty School. This reopened her world and the realization that even the most beautiful women are insecure and carry painful secrets. It created a passion for Shelli to help women feel good about themselves and like who they see in the mirror. After 10 years in the beauty business Shelli opened her boutique which has been voted #1 Women’s Boutique in Tulsa, Best In The Burbs and featured on FOX 23.

RENAE MAYER, MD – Owner of Lifestyle Medicine
Dr. Mayer is a board-certified internist with a background in medical research and clinical practice. In 2015 noting that many medical conditions were potentially preventable with lifestyle changes and functional medicine approaches Dr. Mayer founded Lifestyle Medicine where medicine is practiced differently. Dr. Mayer also serves as Principal Investigator for Lynn Institute for Health Care Research and Clinical Trials and is an Oklahoma Physician for EHE Health, the originator and innovator of Preventive Health Care programs for large corporations.

DEBORAH PEJAK - Owner of Empower Fitness-Faith, Corrective Exercise Specialist, Life Coach
Living in Southern California Deborah became attracted to weightlifting and running. After taking her first class she became hooked to feeling strong both physically and mentally. Fast forward to early adult hood she felt called to the ministry but after an abusive relationship became depressed, unhealthy, and lost her light. By putting God first Deborah rediscovered her strength – physically, mentally, and spiritually which birthed the vision of Empower Fitness-Faith. It is Deborah’s purpose to empower women and help them realize their physical and inner strength.

JESSICA RIDENOUR - Attorney – Owner of Ridenour Law, PLLC
Jessica graduated KU University with a major in Political Science, International Studies and Japanese. Following graduation, she worked for a year with a human rights firm in London. Upon returning to the United States Jessica decided to go to Law School and graduated Tulsa University with honors. Before returning to Tulsa University as a Law School Professor Jessica worked for 17 years in litigation mainly in corporate defense cases. And then 3 months ago took the plunge and opened her own firm that provides advice and counsel in all aspects of labor and employment law.

LAVONDA ROBINSON - Owner of Growing Hands, LLC
Born and raised in Green County, Lavonda always had a passion for beauty. After graduating from Cosmetology Education Center in 2012 she hit the ground running diving headfirst into the beauty industry. After 3 years of working in corporate environments Lavonda decided to chase after her own dream. She has now been self employed for 3 years and hopes to help other women through the process of finding financial freedom in the beauty industry. She is now planning to open a mega beauty store and a cosmetology school.

About RESONANCE
Resonance promotes and supports the well-being and self-sufficiency of women and their families challenged by the criminal justice system. Our goal is to help female offenders succeed. Resonance offers substance abuse treatment as an alternative to incarceration and prison-to-community reentry services for those who have been incarcerated. Through these programs, women learn to maintain sobriety and become better parents, employees, and contributing citizens.

About Kendra Scott
Kendra Scott is a leading fashion accessories brand inspired by the personal experiences, travel, and sense of community of its founder and designer, Kendra Scott. As the brand continues to grow, the company remains true to its founding philosophy of "Family, Fashion, Philanthropy" and since 2010, the company has given back over $40 million to local, national, and international causes.